California is called the Golden State and lives up to its billing. It is truly a magical place – the coast line, the rivers and bays, the sierras, the deserts, the redwoods, the gold rush, the marvelous climate and on and on. Its name could be Spanish. But its name is very unlike those of other states that were once part of New Spain and which have Spanish names. Colorado, Florida, Nevada, and Montaña are all recognizable Spanish words, while California is quite different.  Maybe it is Latin like Hibernia and Britannia (Ireland and Britain). Mystère.

What is marvelous is that California is named for a mythical island of Amazons created in a fantasy adventure novel The Adventures of Esplandian, written by Garci Rodriguez de Montalvo and published in Seville in 1510. How the author Montalvo came up with the name for this island is a matter of serious scholarly debate. In any case, early Spanish explorers thought California (Baja and Alta) to be an island and named it for the island of the novel. The island in the novel is as golden as California itself:

… there exists an island called California very close to a side of the Earthly Paradise; and it was populated by black women, without any man existing there, because they lived in the way of the Amazons. … Their weapons were golden and so were the harnesses of the wild beasts that they were accustomed to taming so that they could be ridden, because there was no other metal in the island than gold.

The beasts they tamed were griffins (half-lion, half-eagle) and the griffins were unleashed on the enemy in battle. The novel pits the Christian hero against Muslim Turkish foes. The queen of California was the beautiful Calafia (aka Califia) who leads her Amazons into battle on the side of the Turks. Needless to say, she is defeated by Esplandian, but then is whisked off to Constantinople (which somehow is still in Christian hands) where she converts to Christianity and marries one of the Christian knights. For the period, this was a happy ending.

Cervantes makes The Adventures of Esplandian one of the books on Chivalry that contributed to Don Quixote’s madness and, in fact, it is the very first of Don Quixote’s books chosen to be burned by the priest and doctor who are trying to “cure” him.

It is fitting that the land of California with its dream factories of Hollywood and Silicon Valley should be named for a magical island of fantasy. Field research confirms that Californians are blissfully unaware of all this; there are exceptions, though.  There is a mural from 1926 of Queen Califia and her Amazon warriors at the Mark Hopkins Hotel in San Francisco 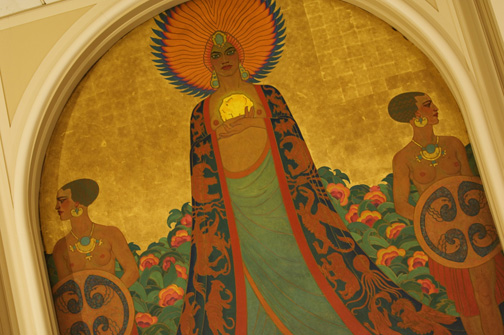 that is worth visiting. Much more recently, the late French-American artist Niki de Saint Phalle created a sculpture garden in Escondido in honor of California’s queen.